Microsoft is preparing a laptop with Snapdragon 8cx Gen 3

Microsoft is not a new player when it comes to laptops or other mobile devices. Until now, it is still developing its own laptop in the Surface product line.

Recent reports obtained from listings on Geekbench indicate that Microsoft is preparing a new laptop product that will most likely use the Qualcomm Snapdragon 8cx Gen 3 chipset.

The benchmark found on Geekbench with the code name OEMVL OEMVL Product Name EV2 indicates that this is most likely a Microsoft Surface product which is the next generation of Surface Pro X. Although there has been no further confirmation regarding the product, the code name written on Geekbench also includes implies that this “EV2” product is a prototype of Equipment Verification Testing (EVT). 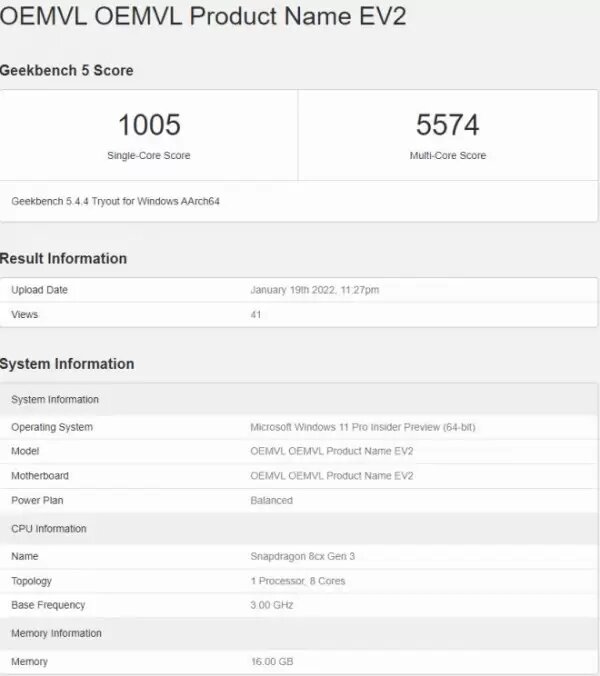 For information, this EVT code means that the product prototype being tested is currently entering a hardware testing phase to ensure all functions run normally before entering the internal and external design phase.

See also: Everything you should know about MSI Crosshair 15 (B12U)

In the same information, the Geekbench test results for this Microsoft product state that the performance of the chipset used will be quite high with a Single Core score at 1005 and Multi Core at 5574. In addition, this unnamed product will have 16 GB RAM and run on OS Windows 11 Pro.

For now, it is still unclear when this Microsoft laptop product will be officially announced. Let&rsquor;s wait for further news from Microsoft officially in the future.