WhatsApp is allegedly developing a new feature aimed at WhatsApp groups. This feature allows users to create a poll or poll.

Similar to the poll feature in other applications, with this feature, WhatsApp users who are members of a group will be able to create a list of choices. Group members can choose the available options according to their choice.

The polling feature in this group has actually been detected for some time. Now, the site for leaking WhatsApp’s new features, WABetaInfo, has shared the latest images of the feature.

This poll feature has actually been detected for some time. Now, WABetaInfo shares the appearance of this feature. 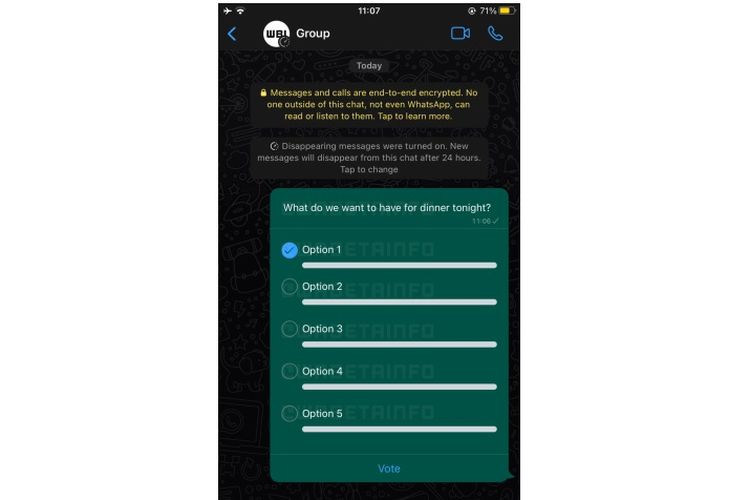 According to the image shared by WAbetainfo, making the poll also looks easy because WhatsApp provides a question column to start the poll. Likewise, several column options are available up to five columns.

Users only need to fill in the questions in the available fields and determine the answer options or opinions that members can choose from.

When a poll is conducted in a WhatsApp group, the user has to select one from the list of available options.

After making their choice, they must press the “vote” button. Thus, the poll results will be visible to group members. However, group members will not know each member’s choice.

WhatsApp polling feature is also be end-to-end encrypted, so no one will know the details, including the company that owns the WhatsApp application.

The WhatsApp polling feature is still being developed by the company. That way, it is not yet known how this feature runs in the application and where the feature can be reached by users.

According to WAbetainfo, WhatsApp is currently testing the feature on its iOS version of the app. In more detail, the poll feature was tested on the application version 22.9.0.70 (beta), as the latest WhatsApp version at this time.

Not only iOS, the polling feature is also being developed by WhatsApp for the Android version of the application. That way, the same feature will also land in beta for WhatsApp Android soon.

However, it is not yet known when this feature will land in the stable version.

Similar to the poll feature on Telegram

If this feature is also adopted by WhatsApp, then the application with billions of users will overtake Telegram’s ability to allow users to conduct polls.

Charles has been covering the gadget news scene since 2010. Have passion in game and blockchain technology.

Everything you should know about RedMagic 7S series specifications

iPad with OLED screen will be thinner and lighter