The iPhone’s A-series processor contributes greatly to the performance of the iPhone and iPhone 13 Pro Max several notches higher. The processors used by iPhone devices offer higher performance than Android phones. However, Android chipsets are gradually catching up.

Reporting from Gizmochina (16/7), this gaming test was reported by Golden Reviewer and he revealed that the Xiaomi 12S Ultra is a better gaming device than the iPhone 13 Pro Max. The analyst puts Xiaomi’s flagship phone ahead of the crowd between Android and Apple phones. 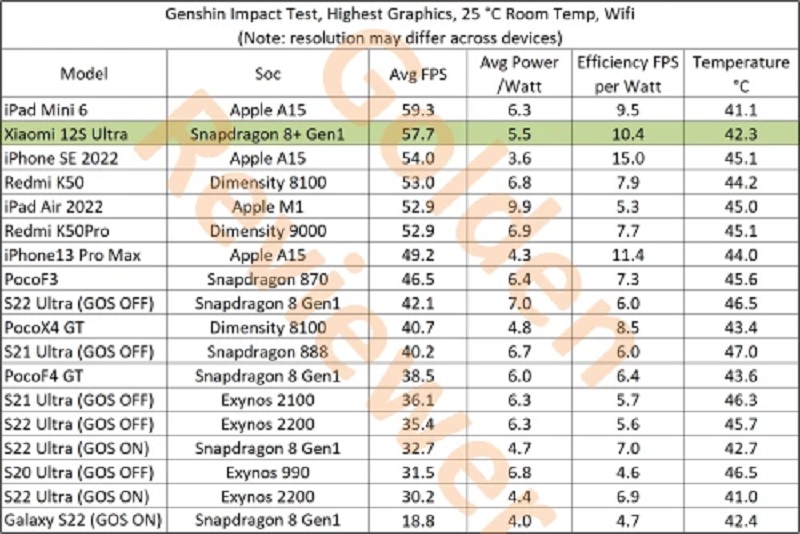 The Snapdragon 8+ Gen 1 chipset on the Xiaomi 12S Ultra seems to be the reason for the good performance of the Xiaomi device. This is a huge improvement over its predecessor, the Snapdragon 8 Gen 1, and other chips. Extreme tests reveal that the 12S Ultra runs at higher frame rates (588 fps on average) than all other high-end phones in 2022. It also doesn’t cause overheating when running at very high frame rates. This is one of the upgrades from Snapdragon 8 Gen 1.

It is noted that the iPad Mini 6 which is powered by the A15 Bionic chipset has a higher frame rate than the Xiaomi 12S Ultra. It will be interesting to review the Geekbench listing for the 12S Ultra and see how it performs against other flagships. The 12S Ultra has a larger primary camera sensor than most phones, a 6.73-inch OLED panel, and 67W charging support for a 4,860 mAh battery.

Huawei Mate 50 will use Snapdragon processor