Leaks related to the Xiaomi 12 series smartphone continue to flow heavily on the internet. The latest leak reveals that the flagship phone line will be launched on December 28.

This indication comes from a poster uploaded directly by Xiaomi via the Weibo social network. The poster shows the figure of a male athlete from China, namely Su Bingtian.

Based on the information contained in the upload, the presence of the figure of Su Bingtian allegedly represents the speed of the Xiaomi 12 series device. 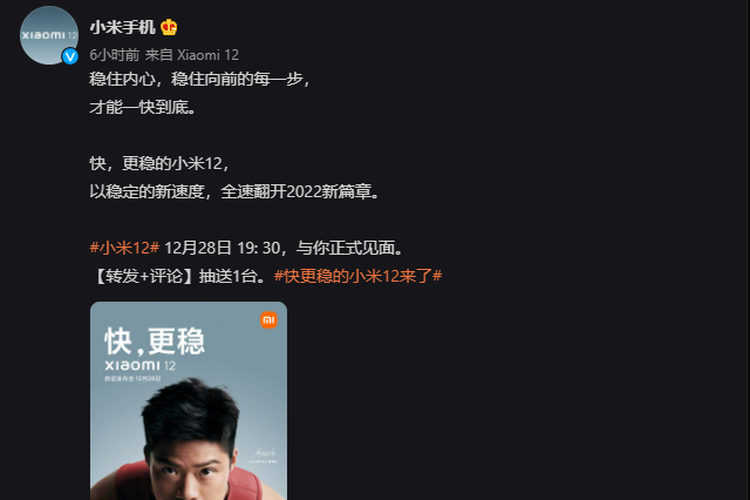 Weibo/Xiaomi The official Xiaomi account uploaded a poster containing the launch schedule for the Xiaomi 12 series device on the Weibo social network.

Meanwhile, the most important point is located at the top left of the poster, where Xiaomi has included the numbers 28 and 12 under the Xiaomi 12 text logo.

If you refer to this information, it is very likely that the Xiaomi 12 will be launched on December 28, 2022.

In the post, Xiaomi explained that this launch event will be held in China at 19.30 local time.

Xiaomi has not confirmed the number of Xiaomi 12 series variants that will be announced at the end of 2021.

However, it is rumored that there will be three models of Xiaomi 12 devices that will be launched, at least according to the information listed on the account belonging to Xiaomi officials on the Weibo social network.

For information, Weibo provides a feature to find out what type of device the user is currently using to upload a post.

See also: Xiaomi MIX Fold 2 will use a UTG panel from Samsung

While uploading a poster of the Xiaomi 12 launch schedule, it appears that the founder of Xiaomi, Lei Jun is using a Xiaomi 12 device.

Overall, the three smartphone models are said to be carrying a screen with an OLED panel that supports a 120 Hz refresh rate.

It is strongly suspected that the “regular” version of the Xiaomi 12 will be equipped with three rear cameras, two of which are 50 MP and 48 MP resolution.

As compiled from Gizmochina, Tuesday, the Xiaomi 12 and 12 Pro are said to be powered by Snapdragon 8 Gen 1, while the 12X will rely on the Snapdragon 870 on the 12X.

Xiaomi 12 and 12 X are likely to be equipped with a 67 watt fast charging feature, while the Pro variant offers a higher power speed, which is at 120 watts.

Alan has been covering the technology news scene since 2010. Have passion in cryptocurrency and blockchain technology.